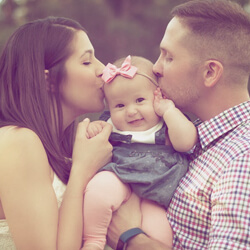 Ain't this a zero-sum game? This question is frequently asked regarding the simultaneous receipt of parental benefit and the so-called Hartz IV. According to the principle 'zero sum play' the payment of parents allowance functions to families, which refer to unemployment pay II (ALG II). On the one side concerned parents receive parents allowance, but on the other side just as much less ALG II.

By the way, the Federal Social Court (BSG) ruled this to be legal in a decision of 1.12.2016 (File reference: B 14 AS 28/15 R). In Kassel, the case of a mother of four children from Halle, who had been granted the minimum parental allowance of € 300.00 in 2011, was negotiated. The Jobcenter credited this money as income on the Hartz IV benefit and shortened the ALG II accordingly. The Authority based its decision on the provisions which have been in force since 2011.

The family, however, saw the crediting of income as a violation of the principle of equality.  After all, in the case of recipients of BAföG and housing benefit, the parental allowance is also not deducted from the social benefits received. This is regulated in § 10 of the Bundeselterngeldgesetz. Section 1 regulates the exemption from imputation of parental allowance in the case of social benefits. Section 5 clarifies that this exemption from imputation has not applied to Hartz IV since 2011. Finally, the Federal Social Court considered this special status of Hartz IV to be constitutionally unobjectionable. The legal dispute about the fundamental crediting of the parental allowance with the ALG II is therefore likely to be over.

An essential tip for affected parents

However, only a few people are aware that in many cases this crediting can be avoided. This possibility is available to parents in ALG II status whose parental allowance fully or partially replaces a previously earned income. The minimum amount is often selected in the application if the prenatal income is not sufficient to exceed € 300.00.

The notification must only be submitted to the job center. The parents may then keep parental allowance equal to the parental leave allowance in addition to the ALG II. The basis for this is § 10 Section 5 of the Federal Parental Benefit and Parental Leave Act, according to which the calculation of the ALG II and the child supplement  ignores the average income from gainful employment before birth of up to € 300.00 per month as income.

Too complicated? - Our tip