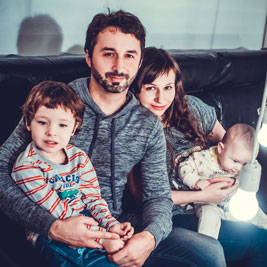 After the birth of their daughter, the father took parental leave for the same period as the mother and was equally involved in the upbringing of the child during this period. After the child raising period had been allocated in full for this period by mutual agreement to the child mother through the pension insurance scheme, the plaintiff additionally applied for the allocation of the child raising periods for himself. The german old-age insurance fund rejected that application.

The father's lawsuit in the social court was unsuccessful.

Now the LSG Erfurt has also dismissed the appeal.

It took the view of the Deutsche Rentenversicherung Mitteldeutschland and the Sozialgericht that the allocation of child-raising periods for the same period for both parents was incompatible with the statutory provisions and confirmed their decisions. § 56 Passage 2 sentence 1 SGB VI regulates the recognition of periods of bringing up a child as compulsory contribution periods for the social security of educators in a phase in which it is not possible, or only possible to a limited extent, for the parent caring for the child to build up his or her own pension rights because of the upbringing of the child. The recognition of child-raising periods in the pension insurance scheme is intended to make a decisive contribution to an equal assessment of work in the family and work outside the home. § 56 Passage 2 sentences 2 to 10 SGB VI ordered the allocation of the respective child-raising period to a particular parent. According to the legislative concept, the allocation of parental leave to only one parent could be considered in each case. The law expressly does not provide for the allocation of child-raising periods to both parents for the same period of upbringing. The provision of § 56 Passage 2 SGB VI grants the parents a so-called power of disposition as to which of the two is to be allocated the child-raising period. Pursuant to § 56.2 sentence 10 SGB VI, the periods of child-raising are divided equally between the parents in a change every calendar month, if it is not possible to allocate them differently according to the preceding provisions. This proves the will of the legislator not to make a complete consideration with both parents.

The father may appeal the decision to the Federal Social Court with an objection to non-admission.

Too complicated? - Our tip